John K-ay The Light of Africa

This is not the first time John K-ay has given back to his community. After Winning the following awards, africanAustralian Celebration as Best Influential person 2015, 2016, 2017 |  Afroshine awards 2017 as Best Actor and Producer | AMMA AWARDS as Best Director and Producer | LIB awards as Best Producer of the year 2017,  BUJA MUSIC AWARDS as Best personality of the Year 2019. John K-ay decided to help a hospital in Bujumbura Burundi by giving them Food, and everyday needs. He also shared his story on his social media Facebook and Instagram. “ I haven’t told any media this but I Was born in a hospital in Ruyigi with very few resources and less Specialised doctors. When I was born, I couldn’t eat, Breast or even cry. The doctors in this hospital didn’t know what to do. They all got confused and people started telling my mother I am as good as dead. They gave up on me. but my mother knew that I had to Live. I have to Live. She travelled from one hospital to another, One province to another, Until she reached Gitega, where a Doctor gave me a pill, Then i started breathing normally, crying and breastfeeding. After my mother told me this story, I promised myself to help people with whatever I can get. Success to me is not about having many movies, too much money, or too much clothes and shoes. Success to me is about being about to help others, and seeing them through their problems and restoring their Hope again. I will help the best way I can. We don’t live forever but our deeds will live on and May our children follow our footsteps. 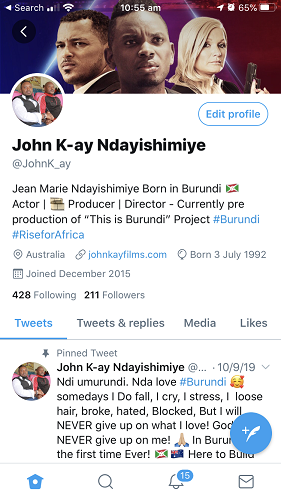 John K-ay Closed the year 2019 with a bang! He licensed his film Cop’s Enemy to MPTV. This film has been promoted worldwide and has over 5 Million people reach through social media promos, world of month promo. The best products sells themselves.

2020, The difficult year for many people, has also been difficult for John K-ay, However the fight continued. He never gave up on his dreams. In February 2020, he submitted his well known and well loved film “Cop’s Enemy” to The African Film festival in dallas”. In June 2020 He won the BEST EMERGING FILMMAKER. This is the first Burundian to win a title in International film festivals.

3rd July 2020, John K-ay said “With all these blessings that have been poured onto me, I have decided to give back again to my people. God blesses you so you can pass on the blessing. There are many people you can help today. Doesn’t matter if you have less. Know that there is someone out there that would be happy if you give them even a $5 would feed their family. I don’t give because I have a lot. I give because I know what it feels to have nothing. I know how it feels to struggle, pray for help, Cry out to God to help you and I know that God doesn’t walk around in suits helping people. No. God works through us. If we allow God to use us. If we allow God to bless us and use us in working for him. The blessings will never stop. No one has ever been broke because of Giving.”

If you still wish to know who John K-ay is, Know this. John K-ay was born in Burundi, Raised in Tanzania Kigoma. Migrated to Australia 2007 until present. He is  an inspiring Actor and Producer. He attended filmmaking studies and acting through different schools and Private classes 101 in Australia. From 2009 – 2019, He Have made the following films “Last Tears 2011” , ‘Nothing is impossible” 2012, “Silent sufferers 2015”, “Restoring Hope 2015”, “Irreversible Choices 2016 and Sold it to Nigeria IrokoTV, “Mkono Mtupu 2018 – In Tanzania, Sold to Startimes”, Awards winning short film “Our Differences 2019”, Blockbuster Film Cop’s Enemy 2016 – 2019’ Sold to MPTV. He is a multi-awards winning influential actor and Producer.

Many have said that the future of the East African film industry lies on John K-ay’s head. He has the talents, he has the knowledge. He has proven his workability and profession through his outstanding film such as Cop’s Enemy and irreversible choices. 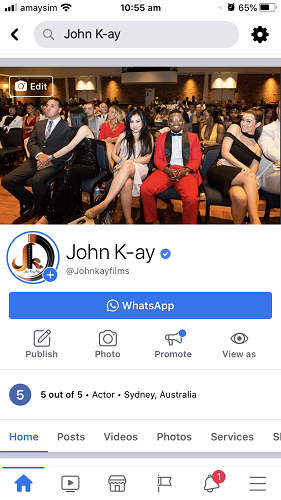 John K-ay has plans to help and grow upcoming artists. Upcoming artists are tomorrow’s future. If you help them with knowledge and skills. The future will be brighter for East Africa.

John K-ay has plans to help less fortunate East Africans, such as People in Hospitals, Schools, Single mothers who are fighting everyday for their children. He believes that if you help a single parent today, You are helping their children and their children for tomorrow’s future. They are the ones who will change the world. John K-ay believes You can not change the world by yourself. However if you inspire many people, they can change their lives and impact the world.

John K-ay believes that You don’t have to go from East Africa to Hollywood or Nollywood. You can create your own Hollywood in your own city. Don’t make films so hollywood can go “Oh this guy is good”. Make films so your community. Your people, your roots can be inspired by your work, so your people can be educated through your work. If you look after the village. The village will look after you.

When Is The New Movie Coming:

Cop’s Enemy is already out. Soon to be on major televisions and Youtube after.

Our differences is airing on Australia television

New Film “Roce is Pain” is coming out late this year. Dates unknown due to Covid19 Restrictions.

John K-ay’s first artist “Raimon Sanga” , one of Tanzanian’s actors, is coming out late this year.

John K-ay is also releasing one short film before the year closes. Get ready for a change in the industry. 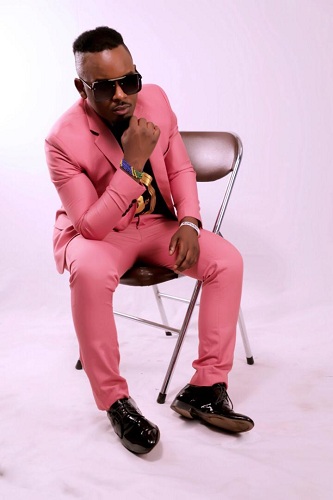 John K-ay has not revealed anything on this matter. He requested we wait for the bigger news.

We can plan 1000 things. But we may not live to see tomorrow or the devil may also be planning his traps. Therefore pray for me. Pray for Africa. Pray for a better tomorrow. God is always in control. Pray. Remember to help someone today. God will help you and give you more. Read this verse. It will help you in life. Matthew 25:42-46

What Does “Qualified Organic Maple” Even Mean?

The best healthcare jobs for working in a team

Importance Of Wearing A Bra With The Right Size